I’ve been pushing off writing this blogpost for quite a while now. I really feel like sharing my experience of living in the Australian outback. On the other hand I’m not too sure what to talk about as there isn’t too much happening out here – unless you travel around a lot maybe which I don’t.

I feel that there’s been a lot more happening and changing inside of me than around me. So a lot of what I’ve seen and experienced here is quite personal and I don’t want to talk about everything to be completely honest with you. There are things you just feel you want to keep to yourself. 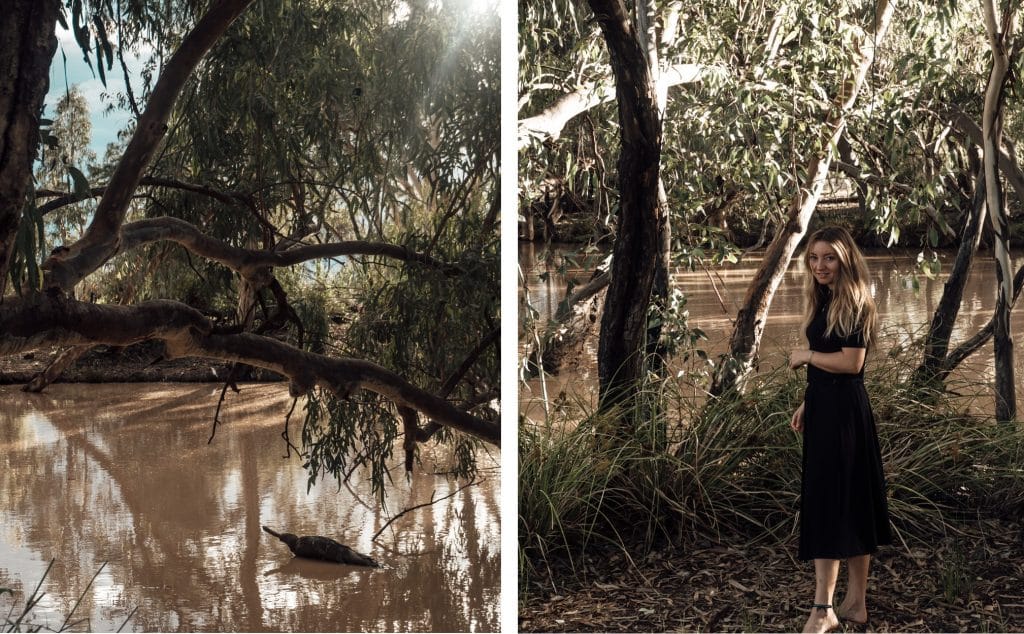 I made a post on Instagram asking if you’d like me to talk about something in particular and some of you asked me how I even ended up out here. Good question, I still keep asking myself the same thing, haha. So let’s just start with that..

After spending 3 months in Bali I started to run out of money (read more about this topic here). So when I got to Brisbane I started looking for a job in the city straight away. After 3 weeks I still hadn’t gotten a job except for a bit of casual work as a kitchen hand which didn’t help too much. I put up a post myself in the job groups on Facebook and received quite a few messages offering me a job as a barmaid in a country hotel, most of them in Western Australia and one in Queensland. I’ve heard about these jobs before and knew you could make quite a bit of money with them. As at that point I started to get a bit desperate about my job situation, I decided to take the risk and go for it even though I had no idea what to expect of this little town called Bollon, the people there and most of all what to expect of the job. I only hoped it wasn’t a scam and I didn‘t waste my precious time and money to get out there. While being on the bus my mood got worse and worse when looking out of the window because there was just NOTHING out there. The towns got smaller and smaller and the landscape got emptier, drier and just looked dead to me. When getting off the bus after 8h, my first thought was „What the fuck is this – no way I’m gonna stay here for too long!“ Oh how wrong I was.. 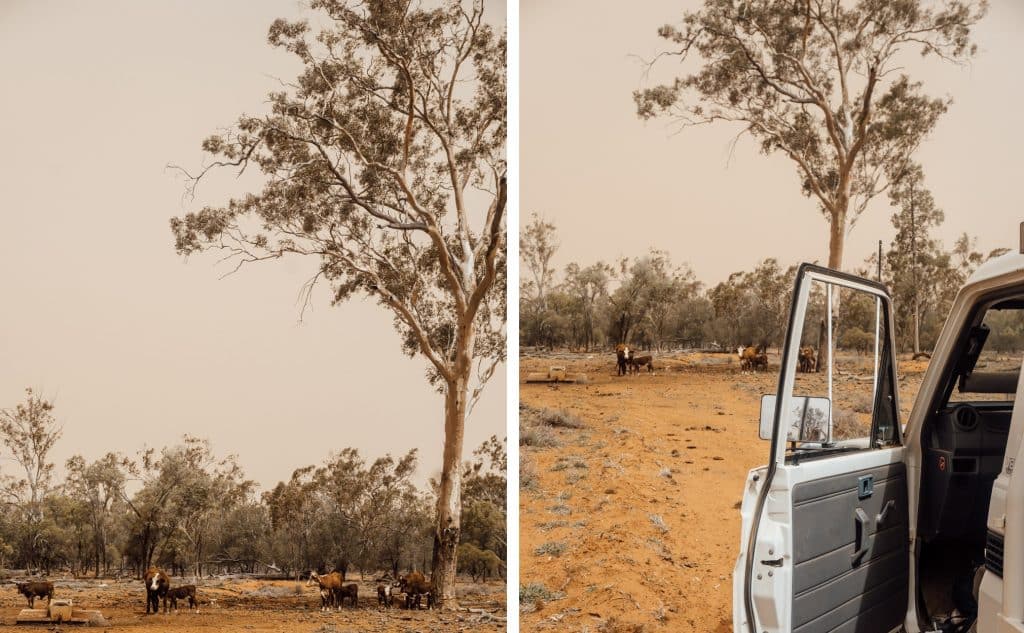 So well, that’s how I got to the outback.

In the beginning I hated everything. I’m not ashamed to admit this, it’s just been a huge culture shock after having spent the past few months in Indonesia and then in Brisbane. Before I’d been surrounded by the ocean, people, green fields, palmtrees, rivers,.. and then suddenly I was in a „town“ with 105 inhabitants, hot temperatures, drought, red sand and the next grocery shop being over 100km away.

When I started my job I really struggled. I’d never worked as a barmaid before, I didn’t know the Australian beers and all the other drinks, I had problems understanding the slang of the people here, their whole mentality and just how life works out here in general. Suddenly I was surrounded by talks about topics I’d never been confronted with before or never even heard about such as roo shooting, fencing or dealing with drought. Out here the weather isn’t just small talk, it’s an actual topic. People know exactly how much rain had come down where which still is so weird to me after all this time.

I also struggled with being bored as it can get super quiet in a country pub especially during the day. After 4 weeks I was about to call a guy in Brisbane who had offered me a job just at the same time I got the job offer from out here to ask if he still needs someone and to then get on the bus and drive back to Brisbane. I’m not sure why but somehow I never did it, I think I’m just not a quitter, never have been. Even if I struggle with a situation I always try to push through, especially if an end to it can be foreseen. And to be honest, the money I could save with that job definitely also was a factor, not gonna lie. I had free accommodation in a room above the pub and could take food from the kitchen for free as well. There not being too much you can spend your money on out here also helps with saving up money. 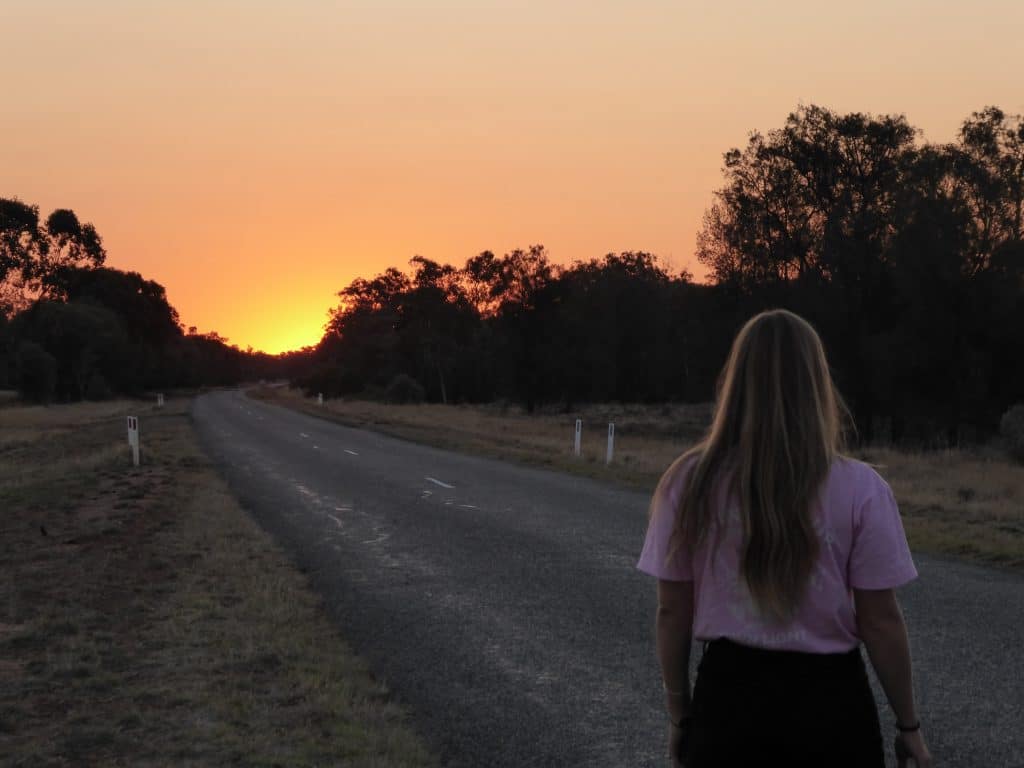 At some point I actually started enjoying my work – not always but on a lot of days. After getting to know the people better, knowing their drinking habits, getting used to the job tasks, being able to chat with the guests as I picked up what the conversations are about and actually understood the slang better, it all got so much easier and so much more enjoyable. Plus most of the people living here have been nothing but super kind to me all this time. I know that the job and this whole life out here are definitely not for everyone. The language and manners can be a bit rough and when you work as a barmaid in an area where there aren’t a lot of young women you need to be prepared for guys staring at you and flirting with you all the time. I know myself well and knew this wouldn’t be an issue for me and that I handle it well but I know that for other girls and women it probably wouldn’t be that easy.

While I had this job from the middle of September until the start of December, I didn’t really do a lot except for working, sleeping, eating, going for a few walks, having a few drinks here and there and going grocery shopping once a week – my weekly highlight, haha. Well, now that I think about it I’m still not really doing anything more exciting but there really isn’t too much to do if you’re not into let’s say hunting, fishing or playing cricket.

Talking about it: If you are a vegan and come to the outback, be prepared to hear and see things you might not wanna see or hear. In the beginning I got upset about a lot of things but then I accepted that that’s how things are out here. Maybe it will change at some point in the future (talking about.. in 50 years earliest? just being realistic..) but right now it is what it is and I had the choice to either stay and deal with it or leave. So I decided to stay and while it is challenging sometimes, I’m grateful to have learnt so much about the life about here and about the point of view of others. Not a lot of people get this opportunity. I know for sure that all these experiences have changed me as a person, have broadened my horizon and definitely have changed some prejudices and opinions I might have had before. 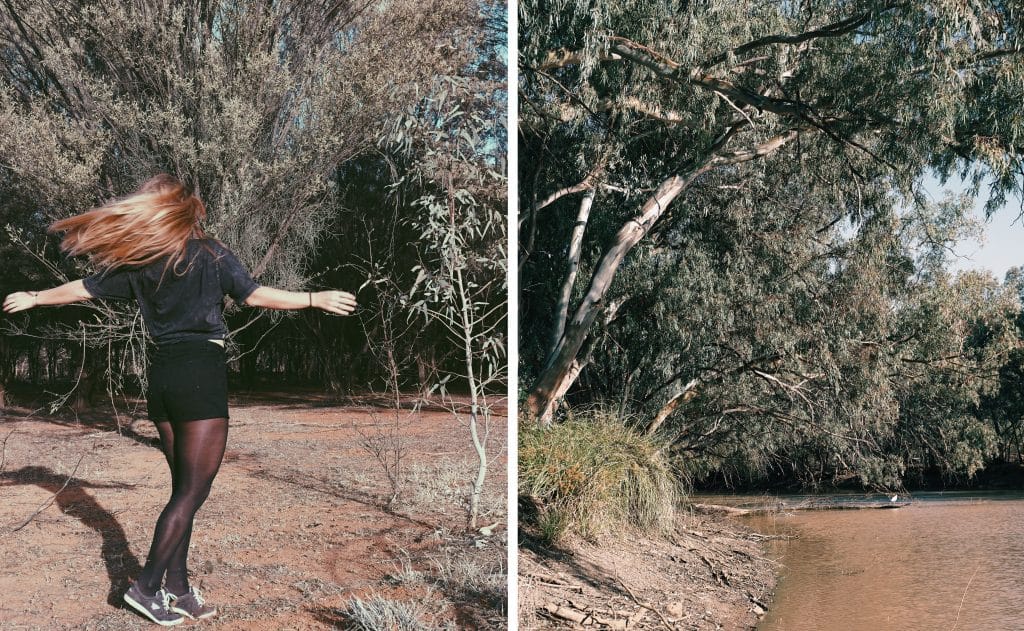 I also got the question if I see a lot of dangerous animals such as big or poisonous snakes and spiders. Actually I get this question quite often and people already tried to scare me with this topic before flying to Australia but the answer is no, I don’t. I haven’t seen anything but the common house spiders and I got to hold a carpet python but only because one guy has a lot of them in his garden and brought one to the pub. Even when being a bit farther out in the wild or on properties I haven’t seen any. I know a lot of people don’t see many of those kind of animals but I also heard some scary stories such as by boss getting bitten in the hand by a spider once or someone else almost stepping into a venomous brown snake. So I wouldn’t worry too much if you plan on travelling here. I definitely did before as I have a bit of a spider phobia as so many people do. It’s important to just be aware that these animals exist and always keep your eyes open. One of the things I truly have to deal with and am still not used to is all those flies out here. It’s so annoying and disgusting when they try to get into your eyes, nose and mouth all the time.

Another thing I really struggle with is the heat. I’m not too much of a summer person in general and if it gets over 25 degrees back home that’s already almost too hot for me. Here I have to deal with over 40 degrees sometimes and it’s not easy. It’s another reason for why I’m not doing too much outside – it’s just not possible. The best thing is to stay inside where there’s air conditioning. If I want to go for a run I have to go early in the morning or late in the evening but even then it doesn’t get cooler than 26 degrees in the morning and 36 in the evening. However, I have to say that I got used to the heat at least a little bit more, I think. Would’ve never imagined I could survive temperatures like this. 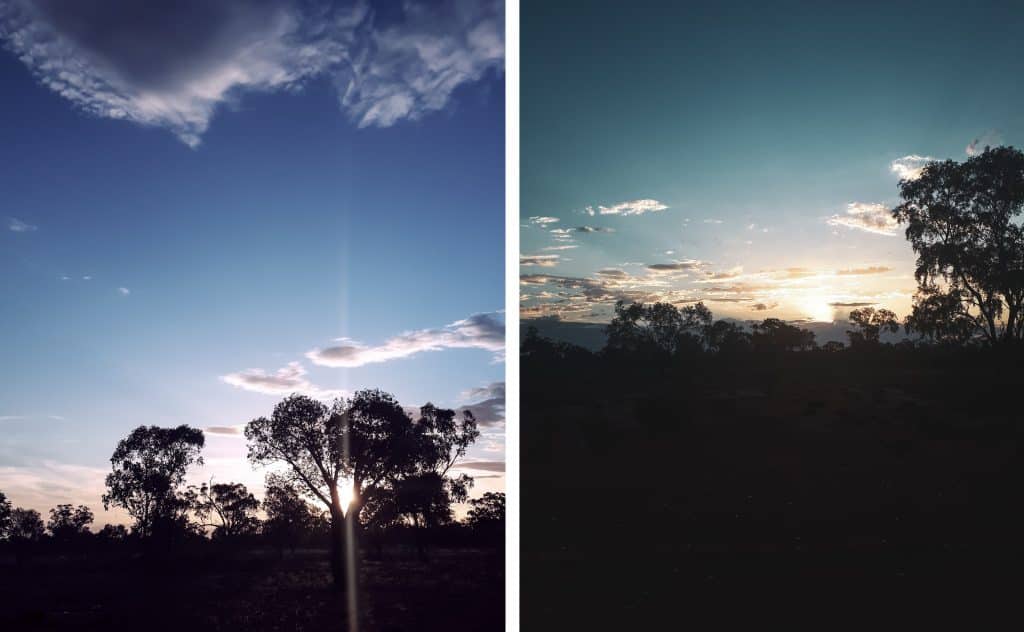 One person asked me to talk about falling in love and well, at this time that’s a very personal topic for me that I don’t wanna get into detail too much. I haven’t talked about the whole situation openly yet except to some people that are close to me. However, of course a lot of you guessed right that I have found someone out here. Yes, I’ve actually fallen in love which I’d never expected, never planned and never wanted. I haven’t felt like this in over 3 years and I wish I wouldn’t because this situation right now isn’t the easiest as you probably can imagine. We’ve been with each other for about 3 months now and I even moved in with this guy after my job was done and I had to leave my room above the pub. So he is the reason why I’m still here in this little town in the middle of nowhere. That’s all I’m gonna say about this topic at this point. Now we can only wait and see what the future brings but it’s hard to see a future with the two of us being together, realistically speaking.

All I know right now is that I probably won’t leave the outback for at least another 3 months as I decided to get my second year visa for Australia which you can apply for after having done at least 3 months of farm work in a rural area. However, this job won’t be in this area here but in another part of Australia to which I will fly to in a couple of days.

Isn’t it funny how life works? Before coming to Australia I never wanted to go to the outback and never planned on getting my second year visa either. I just wanted to get a job by the coast and go surfing, I had absolutely no interest in seeing the outback AT ALL. And now in the end I will probably have spent at least 8 months of my first year in Australia out in the bush. 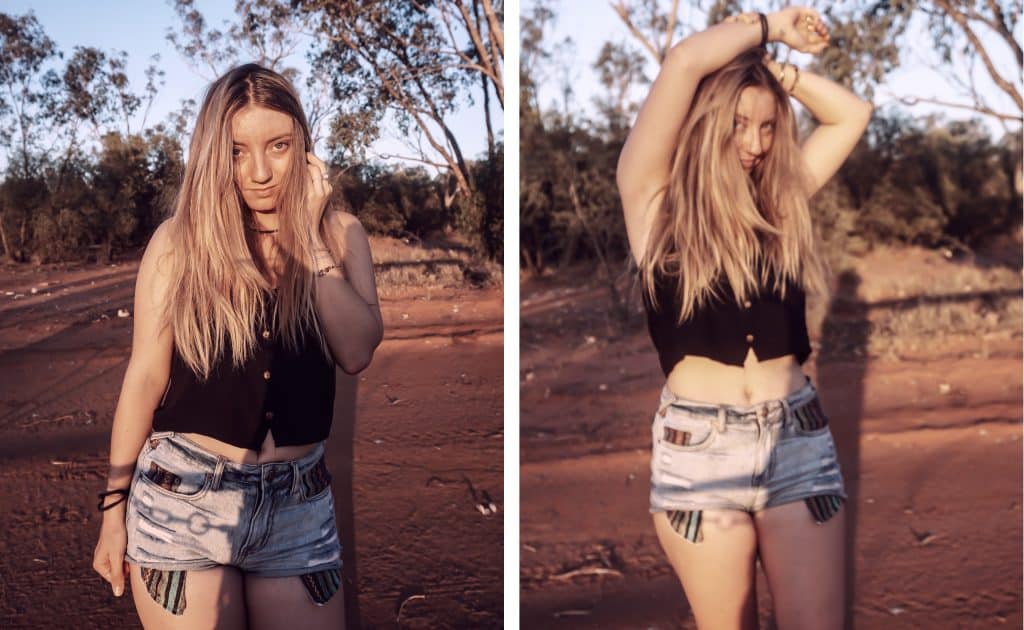