During my months abroud in Sweden I decided to go on a trip to lapland with some other people. In winter semester the university organizes a big trip for all students who want to go but we were there in summer semester. We didn’t want to miss going there since being in Sweden anyway so we booked a guided tour with Scanbalt Experience. At first we thought about going there on our own but I think it’s quite hard in Lapland without a guide and with just a few days time to see as much as possible. It was quite cheap for such a tour as well and at first we were a little sceptical but everything worked out just fine.

We went to Stockholm first and from there the bus of the organisation departed. It was a really long way to Lapland, about 1200km. It took us more than 12 hours to get there which wasn’t fun as it was quite uncomfortable in the bus. But we were looking forward to lapland so much that we didn’t mind. 🙂 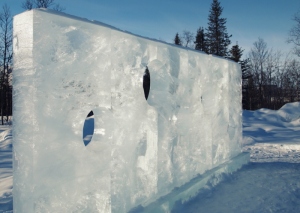 At first the bus took us to Kiruna, the northernmost town in Sweden. After a breakfast at a hotel we went to our hostel in Kiruna and after that explored the town. There were lots of impressing ice sculptures, lovely houses and a beautiful church. We even saw the Swedish king’s Lapland residence. 😀

On that day we also went for dog sledging and snowmobiling. You could choose optional for an extra fee if you want to take part in this but of course noone of our group did want to miss it. I’m so glad I did it, it was one of the most amazing activities I’ve ever done! The dogs were so adorable anddriving the snowmobile was just too cool. After that everyone wanted to have his own snowmobile. 😀 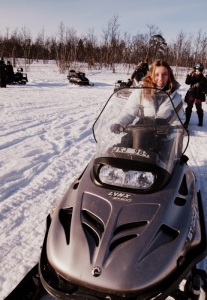 After this day we were totally exhausted but as we hoped to see the Northern Lights at night we stayed awake quite long. Some people just went outside to wait and others like me went to a nice karaoke bar. Somehow it was a strange feeling to sit in a bar in such a calm and lonely town apart from civilisation. Unfortunately we were not lucky that night as there were no Northern Lights. We had been so disappointed because we heard from others that they saw the lights in Kiruna. 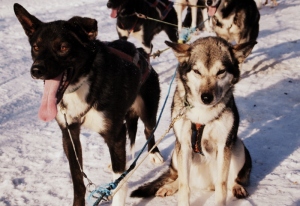 The next day we had to get on the bus again which brought us to Abisko National Park. On our way there we stopped at the famous Ice Hotel in Jukkasjärvi. First we had a little tour through the hotel and after that we could explore the different rooms and the ice bar on our own. It was amazing how quiet the rooms were because of the ice walls. It didn’t even feel that cold but when you stay at the hotel you only spend the night in your ice room and stay at a normal house next to it during the day.

Our second stop was at a reindeer farm where we visited a Sami family, the indigenous people of Northern Scandinavia. The two old Samis told us a lot about the Samis’ way of life. At first we sat in a wooden cabin around a fire and they gave us reindeer meat and and Juobmo, a strange drink out of sorrel, milk and sugar. As I wasn’t vegan back then I tried it but honestly I didn’t like it. 😀 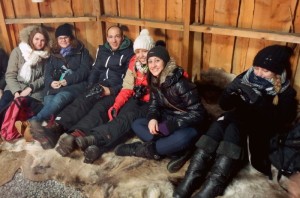 After storytelling around the fire we went outside to see the reindeer and to learn something about those lovely animals. I was surprised that they were so small, I imagined them to be bigger. They also were pretty shy so you couln’t really touch them. I though they were a little more cuddly, like moose. 😀 I really to stay around them anyway except for my feet getting so cold after a while, I couldn’t really feel them anymore. That’s why we all were quite happy to get back on the bus again.

Speaking of the cold: It wasn’t really that cold in Lapland when we stayed there in March. When you hear about Lapland you think about freezing weather but we were lucky and it was pleasant at about -5° to 0° and lots of sunshine. It even was almost not possible to do the dog sledging as they cannot run when it gets too warm. We heard though that a week later the temperature fall down to -20°. 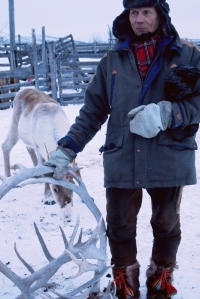 After this we finally arrived at the National Park and put our stuff in our confined group room in the hostel. After a good dinner we went out to a big tepee to drink hot mulled wine, sing and talk while waiting for the Northern Lights again. It was a lot of fun as there were so many different people from all over the world staying there with us.

And then there it was: Aurora Borealis. Everyone was just amazed. We couldn’t really believe our eyes and I even shed a few tears as I was so overwhelmed by my feelings. I wanted to see them my whole life and now this dream came true. Funny thing though: At first we didn’t even now the Northern Lights were coming. We just knew it because our guide said so. In the beginning it looked more like fog. hat many people do not know and what I didn’t know: The lights are not as colorful as on photos because the human eye is not able to see the colors. They are just white with a very light blue and green touch. I also wasn’t able to take any photos because I didn’t have the right equipment for that.

The next day we went on a trip to Narvik in Norway. It was again quite a long trip but it was absolutely worth it. I always wanted to see the Norwegian Fjords. The trip was also quite nice because of the beautiful nature and the interesting facts or guide, who herself is Norwegian, told us. It was really facinating how empty this country is. When we drove there we almost didn’t see any houses on our way. We stopped at a really lovely village though to catch a first glimpse of Norway’s beauty off the bus.

In Narvik we took a ropeway to get up to a mountain to have a view over the landscape with all its Fjords and snowy mountains. And what an amazing view we had! We couldn’t stop taking photos. It felt so free up there. It also was really warm and sunny so we could walk around without jackets which made our stay even more enjoyable. We also got the chance to experience Norway’s prices. I think I paid about 10€ for a coffee and a small piece of cake. 😉 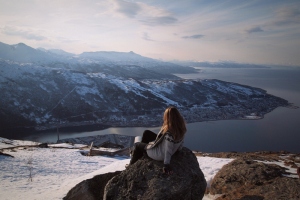 Back in Abisko we went to a cozy sauna out in the nature. We were told we can go into a hole out on the icy lake when we’re hot anough. Almost everyone of us said that we will never do this. The hole looked really frightening and noone liked the idea of dipping into an ice-cold hole at night in the middle of nowhere. But in the end everyone did it and it was such an awesome feeling! It wasn’t cold at all because we were so hot from the sauna and after you get out of the hole again you still feel so warm.

After getting out of the whole you become a little cocky so we stayed outside, jumped around and took photos until our guide reminded us that it’s freaking cold and we might get sick.. 😀 In the evening again we were so lucky and saw the Northern lights a second time!

The next day we had some free time. We strolled around in the nature, watched some people do ice-climbing (you could book this as well but this was not for me..) and did some sledging. In the afternoon it was time to go backon the bus for our drive home. Of course noone was happy about the long bus stay again.. During the night we stopped at the Arctic Circle and somehow everyone was so excited about it when honestly I was just tired, sleepy and cold and wanted to drive on. 😉

Overall this trip was one of the most amazing experiences ever in my life, if not the most amazing one! I can only recommend anyone to go up north one day if you haven’t already as the nature is just fascinating and it’s so peaceful and calm. Just for that trip alone it was worth studying what I study these 3 years even if I always say I wouldn’t study this or in general again. I’m not sure if in my life I’d ever gone to Lapland without my semester in Sweden. 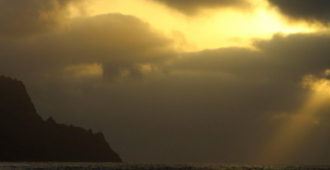 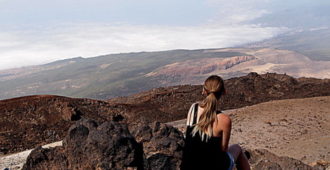 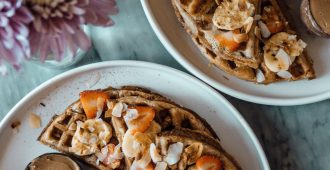